My wife once said this to my 23 year-old son about his budding relationships ….

“Before you make a commitment to the girl you think you might want to spend your life with you should travel together.  When you travel you replace the responsibilities and hassles that can weigh you down in every day life with the excitement of navigating through different cultures and foreign lands.  If you don’t get along in circumstances when you’re relaxed, happy and wide-eyed with wonder then you likely never will”.

The second and third sentences in that quote are actually my expansion of Jacki’s point.  Jacki doesn’t talk like that, especially to Nick.  She and Nick are on a less verbal mother-son wavelength that I can only try to reduce to writing.   Nevertheless I like to think that Jacki is, of course, thinking about our relationship when she says things like this and that would be heartwarming … if it were true.

Here’s my version of the theory about travel and relationships:  women will find out everything they need to know about men when they travel with them; therefore, traveling with a man allows a woman to more easily adjust to the stupendous compromises they must make when she actually has to live with one.

I should however point out that it’s on the woman if she is deceived in judging a man by how easy he is to travel with …  let’s bullet point a few examples of potential misunderstandings:

Back to relationships.  While traveling women still get to make all the important daily decisions.  In a foreign land men must be completely okay with this concept because they generally have no idea where they are or how they got there;  and remember it’s your wife who knows where your return airline tickets are at all times and therefore how you are going to get home … to watch ESPN.

Disclosure: I am expanding this latter point to include all men even though I am referring to me because I believe I am generally correct

Before I leave this subject once and for all I offer these two photographs to support my conviction that the design of the Eiffel Tower was directly influenced by French Lingerie. 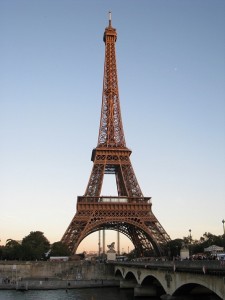 Read Julie’s post on travel as a “relationship test drive”!