I have several Grand Theories about things and one of them is that wherever the French have been in the world they transform the cuisine.  I have been to a few of those places:  Vietnam and Laos, the old French Indochina.   Thailand by association.  French Polynesia.  Montreal.   Even New Orleans.   All great places for food  …  and bread.   I would bet that if the French had invaded your home town a hundred years ago and then they were inevitably driven out by say, the local PTA,  you would nevertheless be left with three French restaurants and, for the next century, all the townsfolk would be walking around carrying baguettes under their arms.

I had high expectations of dining out in Paris.  It is true that every restaurant in which we dined was loaded with charm and ambience;  but really, anytime all the people sitting around you are speaking French while you eat, that’s ambience,  n’est-il pas ?

Here’s the thing about the food though,  if you’ve cleaned up your diet brace yourself to be confronted with the likes of  …  ‘confit’, duck preserved in it’s own fat then cooked in its own fat and served with potatoes cooked in the same fat;  or terrine, a cross between fruitcake and spam;  or cassoulet, a casserole stuffed with white beans and the meat of whatever on two or four legs happens to be wandering around the backyard.  And don’t even talk to my wife about foie gras and the latest outrage among foodies,  The Goose Inquisition.  This is Crusader food.   You actually are introduced to forcemeats.

The first French cookbook dates back to Louis XIV …. Le Cuisinier Royal so that you know I actually researched this.   Its revelation was the joy of cooking with pork fat.  It was then updated in 1712.  Not since apparently.

Lest you think I am le rube,   I know I am being flip and ignoring the refinements that followed from the influences of iconic French chefs like Marie-Antoine Caremel,  Escoffier  and, later, the nouvelle cuisine of Paul Bocuse.  The evolution was away from heavy sauces and more reliance on the natural flavors.   Americans like me, who keep on-hand an arsenal of stuff in bottles and shakers to dump on food before I taste it,  find nouvelle cuisine dishes …well, subtle.

When you studied American history did you learn who George Washington and Abraham Lincoln’s chef’s were  ?  The French know this kind of thing. 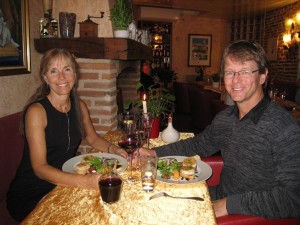 This is just the salad (yes, we started with the salad).  Looking closely you will see  two rounds of warm goat cheese (le chevre) , only slightly smaller than hockey pucks,  but much tastier  …  but then I ever eaten a hockey puck prepared by a French chef. 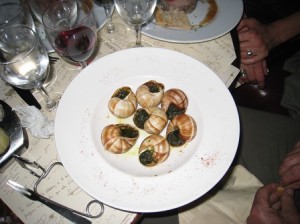 This is of course les escargot.  Notice anything missing ?  There are no pools of creamy garlic butter to sop up with your french bread.   Sacre bleu !  C’est un scandale !  My Aunt Helen (again) had a plastic tube of snail shells exactly like the ones pictured and she made her escargot just like this  …  with little spring loaded clippers to hold the shell,  but no butter. 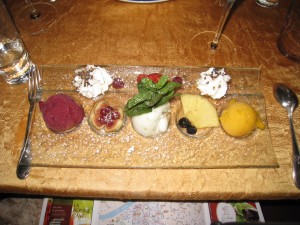 Here’s a helpful phrase when you get your first look at the calorie-laden food as it arrives.

You can also use this phrase when the bill arrives –  right after    “Holy Crap!”

3 thoughts on “THE INCOMPETENT TRAVELIR … ‘le rube’ eats out”