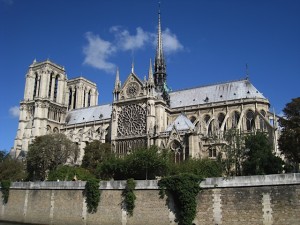 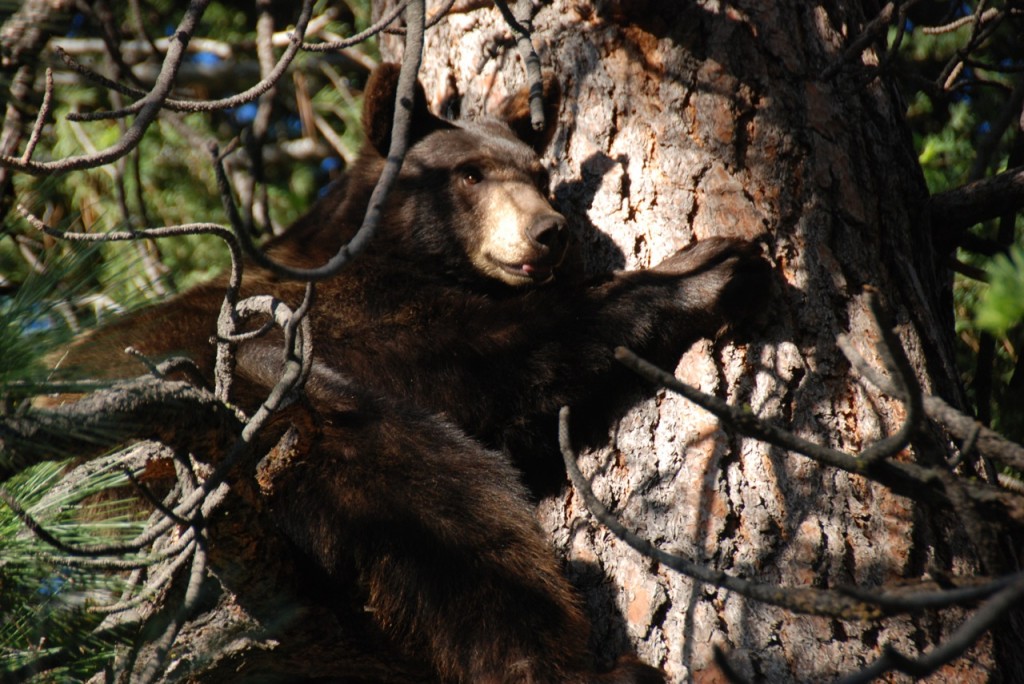 This was taken 10 feet from our deck, after his dinner in our condo!

In some places they have “fish stories”, in Tahoe, we have bear stories. It’s a classic tale of best intentions, producing unexpected, undesirable consequences. Twenty years ago, it was rare to even see a bear in Tahoe, unless you were in the back country. 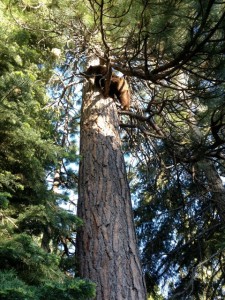 Getting as far away as possible from that damn dog!

The way I understand it, at some point some mama bear figured out that it was easier to eat garbage out of the trash cans, or the dumpsters behind restaurants, than it was to forage. She taught her cubs this nifty trick, they taught their cubs, and voila’! – we have a bear population that no longer knows how to feed themselves in the wild. The problem is, that in an effort to stop the bears from eating trash, everyone installed “bear-proof bins” and now lock their dumpsters, so, the bears have no choice now, but to go into houses looking for food. And it is getting worse every year.

Bears are now a regular fixture in neighborhoods – strolling down the street, thru yards, and along fences. Once I watched a mother and her 2 cubs climb on top of a wooden fence and walk along the top like a tightrope! They are smart and very agile. They open home, garage and car doors, and can navigate refrigerators quite well. 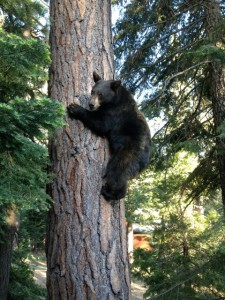 OK, dog seems to be safely behind glass door...

The new millennium bear diet – fat & sugar – just like humans! The bear in our house ate a jar of honey, then put the jar in the sink, with the lid back on it!! It took the lid off of the ceramic butter dish, ate the butter, without harming the dish. It opened the freezer and ate frozen organic blueberries, but left a whole container of fresh blueberries on the counter! (Apparently they only know human food, and no longer recognize fresh berries?) He also enjoyed avocados, and my precious farmer’s market peaches. At least he left the wild prawns I had marinating in the fridge for dinner! He left us his calling card – a large pile of poop in the living room – before the neighbors dog “got wind of him” and went crazy. Maybe “scared the crap” outta the bear? 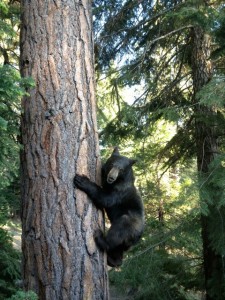 Mom never said it'd be this tough getting food from houses!

The number of home invasions by bears in the Tahoe Basin is increasing every year, and the bears get smarter, and bolder all the time. Lucky for us, they are California Brown Bears (not Grizzlies) so they tend to avoid confrontation with humans. The best tip I was given to avoid tangling with a bear, was “once they have your food, it is theirs, so don’t even think about trying to get it back!” Mark had one drag a 5lb bag of dog food out of his garage, dump it on the lawn in a neat pile, where he sat, legs spread around the pile of food, and chowed down, while the dogs were going crazy in the house! Another bear climbed into a car, the car door closed on him, and in his panic to get out, the bear totaled the inside. The car had to be towed away – steering wheel & stick shift bent, windows broken.

We live in such a small, safe community, is it really a big lifestyle change for me to remember to lock all of the doors and windows when we go out, but I guess I am going to have to get better about that. (The bear slid the bedroom screen door open, cruised through the downstairs and went up the stairs to the kitchen. We arrived home just as he was exiting the same way. If we had come home 2 minutes sooner, we would have been face to face with him in the stairwell! Not a good situation.

I guess if we all lock down our garbage, houses and cars, eventually they will be reconditioned to live in the forest and eat bugs?? Or will they just get more and more aggressive about getting into homes? I don’t know what the solution is. It seems the more we deprive them of the food they have now become accustomed to, the more they break into homes. Quite a conundrum… as much as I love seeing them around, I hope we can find a way to get them ‘back to nature’, otherwise many more will be tagged as “repeat offenders” and could be killed. A sad state of affairs.