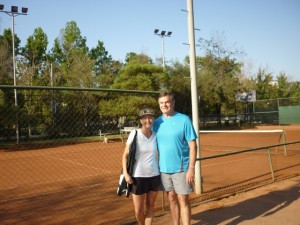 Our first time on clay at the International Sporting Club, where the local players were very welcoming!

A perfect day in Santiago… tennis with the locals (super fun old guys with all the shots in the book!) at the 100+ year old tennis club, followed by fresh lemonade, coffee, and pastel del choclo – a local favorite – corn pie, then back to our hotel for a siesta! 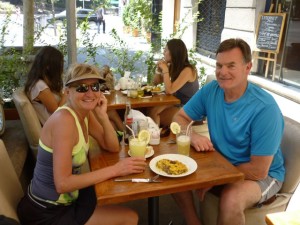 Sidewalk cafes are everywhere, and I want to enjoy every one of them!

Wake up to birds chirping, the distant sound of a concert in the park below our balcony, the ice cream man’s bellow – which sounds like Hello-Hello, but is actually “helado, helado”.  Next on our busy schedule – time to hit a cafe for “onces” (elevenses) which makes no sense, since here in Santiago, they take their “once” between 6-8pm, sort of a warm up for the night out – coffee and sweets, before wine and dinner – I love this city! 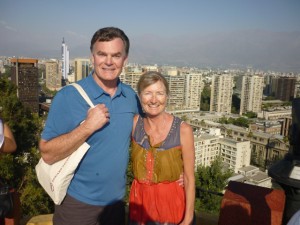 Atop Cerro Santa Lucia, a short hike, up steep, worn stone stairs for views of the city.

After fortifying ourselves, we decided to climb up to the castle/park on the hill. Love is in full bloom in the parks of Santiago – couples laze around for hours tenderly caressing and making out – public display of affection is everywhere – I’m all for it! 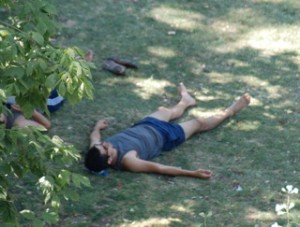 A pretty standard park pose. (Sorry, I am not a voyeur, no pics of the park lovebirds) 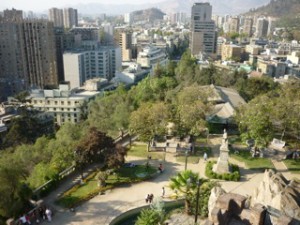 View of the city from halfway up, still a little smoke from recent wild fires.

Another thing I am enjoying – the street musicians. I think the best I have ever seen are here in Santiago. We have heard classical guitar, violin, opera, and at one point – a flutist playing Eine Kleine Nacht Music, while from the other direction, a sax putting out some mean blues. 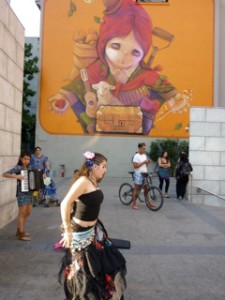 Belly dancer with graffiti wall behind. Graffiti is ubiquitous in Santiago. 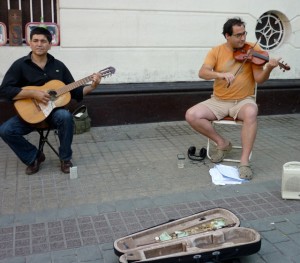 These guys were great, until a VERY loud alarm went off in the museum and silenced them, bummer!

For cocktails and snacks, we found “Bar the Clinic”, named after the local socialist newspaper, with drinks named after famous rebels, and walls decorated with political cartoons, that we really wished we could understand! 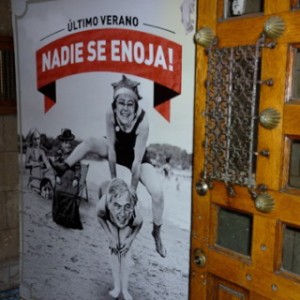 Michele Bachelet was just reelected, so I assume that is her face imposed here, leapfrogging over ? 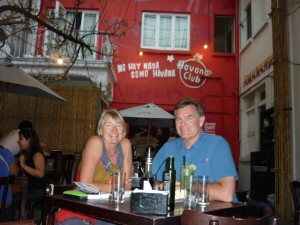 Gotta have some reference to Havana in a rebel socialist themed bar!

My drink was named after some guerrilla group that fought to get rid of Pinochet. It was pisco, with limon, fresa (strawberry) and aji’! (chili peppers!) Buenos Noches!

Five years ago I had the privilege of filming 2 Passport to Adventure episodes in the Aysen region of Chilean Patagonia. I fell in love with the raw beauty of the place, and met so many wonderful people, I have returned with David, to visit and explore the region further! The more I explore, the more I realize there is so much more to see… 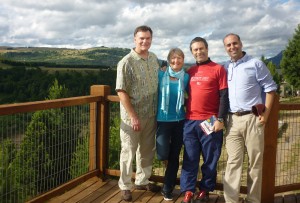 We are not much for checking stuff off a list, and we never have an agenda, which leaves us free to accept spontaneous offers. Our first choice is always to hang with the locals. Boy did we score – we were invited to join in the family reunion weekend out at Estancia del Zorro (their ranch). 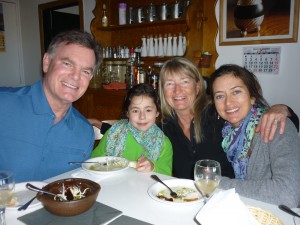 Such a fun family – all 23 that we spent the weekend with!

We went horseback riding, watched the alpaca shearing, learned to play Chilean liars dice with the entire extended family, helped cook, practiced our meager Spanish, and shared homemade schnaps, wine and lots of laughs. We enjoy activities and sightseeing, but for us, getting to know the people is always the priority. For this type of travel, you must be flexible, not be in a rush, and not get too attached to seeing certain sights. For us, it’s all about connecting, that is why we travel. 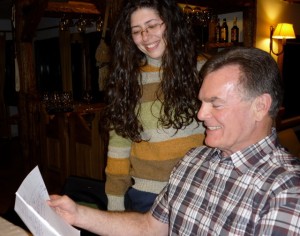 David studying the family tree he requested, and Nacha drew up for us. 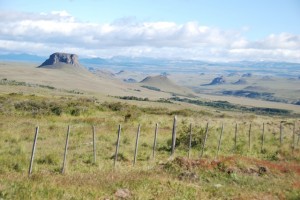 Valley of the Moon, Coyhaique Alto, home of the most amazing condor viewing spot

More to come… so much to see, too little time to blog!