We needed to get to the town of Pokhara in central Nepal.  We could fly or take a bus, but this was an easy decision.  Everyone who has traveled on a budget in a third world country has the “local bus” story.   For Jacki and I  it was a 10-hour, white-knuckled, death-flirting on a ‘local p.o.s. bus’ that sent us hurtling down narrow, twisting, potholed roads cut into ridiculously steep hillsides with essential pieces of the bus either missing or occasionally flying off  (which I actually witnessed).  That was our trip from Kathmandu to Pokhara in 1986,  when two lanes of east-west traffic met on an eroded single-lane road  … like two trains on the same track  …  creating an 8-hr stopped-dead stand-off.   I remember trying to sleep on top of our stalled bus on a burlap sack of zucchinis and, when that failed miserably,  I tried to eating them raw  …..  pittoooee !

This time we flew.  Zucchini free. 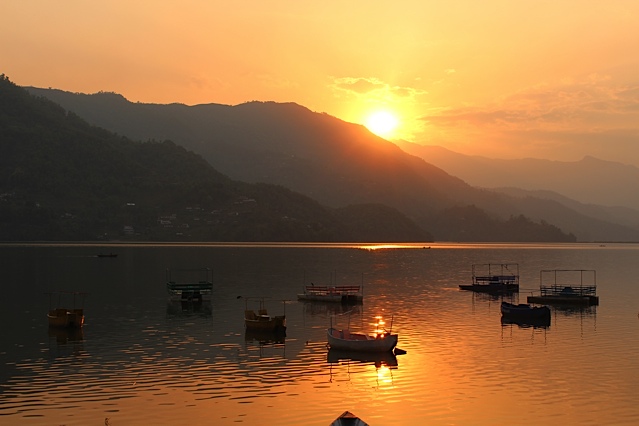 Pokhara is a busy town on a tranquil lake.  You could even miss the lake all together if you stick to strolling down Pohaka’s bustling main drag,  a crammed wall of restaurants, clubs, trekking provisioners and the curio shops.   You ‘discover’ lovely Lake Phewa by walking through an entry to a lakeside restaurant to a typically pleasant  zen-like garden scattered with an eclectic collection of tables, chairs, burl benches and chaises.   These laid-back cafes pull in all the tired tourist feet for beers and sunset. 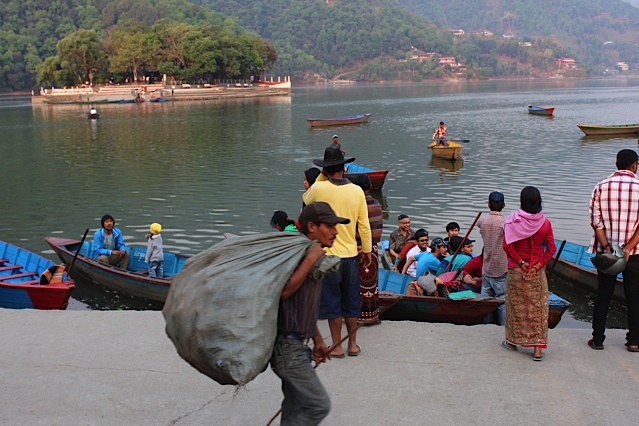 Thanks to Lake Phewa and the local leaky-boat rental,   I can add ‘sailing in Nepal’ to ‘skiing in Dubai’ to my list of travel sideshows 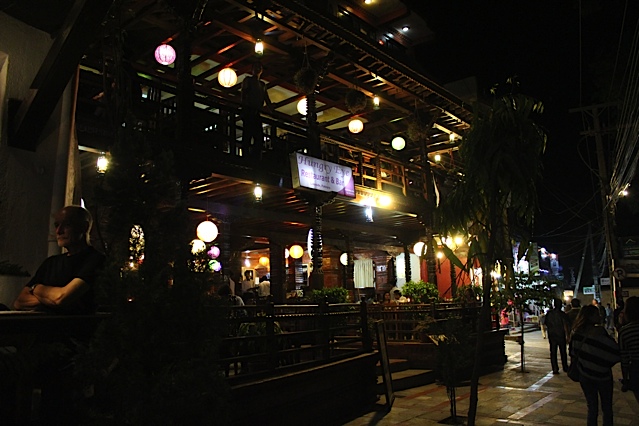 Exquisite food.    Servers you want to take home.  No tipping.  Dollar beers ( 650 ml )  … about what you would spend for lunch at Dennys 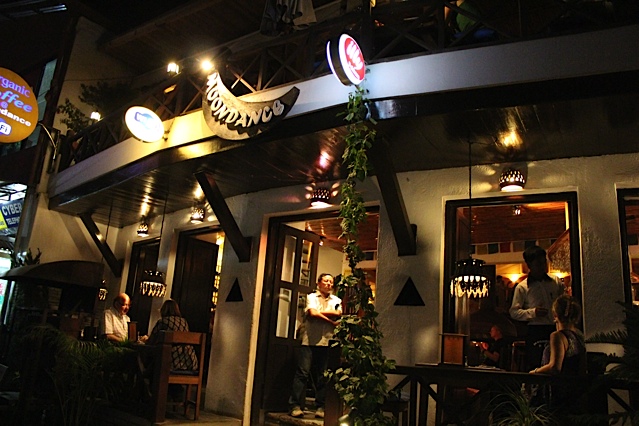 Pokhara is destination where trekkers from all over the world, heading into the Annapurna Sanctuary, or some shorter circuit, stage their treks.  ‘Staging’ is the preparation real mountain climbers do to assure a successful expedition.  Staging for us meant renting sleeping bags and buying some genuine knock-off  Northface parkas.   ‘Northfakes’, as they are known locally,  are actually well-constructed jackets, by all appearances, with a flawless Northface logo right where it belongs.   The negotiation with the shop owner is whether we are getting ‘chinese quality’ (the genuine knock-off … “good”) or ‘nepali’ quality (less “good”).  Nick and I make the deal at $35 a piece for a couple snazzy maroon shells with gray zip-in liners.  Because these jackets will be our first line of defense against the freezing temperatures and snow at 14000 feet, we sprung for ‘chinese quality’ with the Northface logo spelled correctly.   The sleeping bags will also be rentals.  It really doesn’t make sense to lug all this stuff from home.  The shopkeeper assures us the sleeping bags are chinese quality … and ‘new’.  We pull out one sleeping bag (Jacki’s) and its looks serviceable.  After a further negotiation which involves a couple of bandanas and a slick new Northfake shirt which I will store at the hotel for my return and later burn a hole in by touching it with an iron.

The gods chose the most dramatic ‘himal’ of all the Annapurna peaks as the sole sentinel viewable from Pokahara.    Machapuchare rises to the north like an elegant 22,000 ft  ‘fishtail’.    It is the morning view that brings you to whatever window, balcony or street corner you find yourself first thing in the morning when the air is clear and crisp and the light brilliant.   For just a moment all thought flees,  your breath slows and you smile for nothing    …   then you can go pee 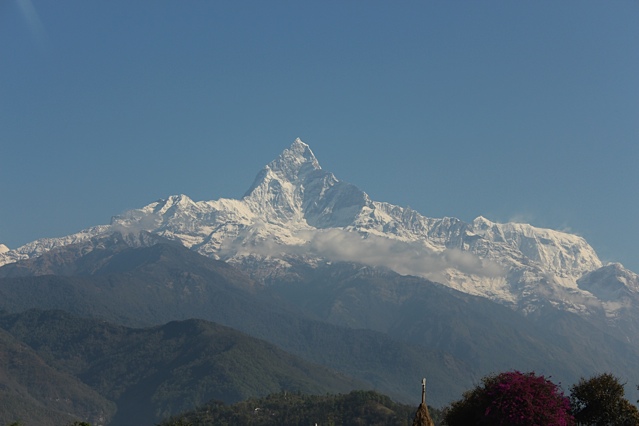 Machapuchare from a Pokhara rooftop

Oh, and a last note to self.   Next time check all three sleeping bags before renting them because, as Nick and I will soon discover,  the other two new-chinese-quality’ bags we rented for sub-zero temperatures somehow got through the Guangdong Northfake Sleeping Bag factory during the down feather stuffers strike  … or during the ‘glorious one-duck-per-bag five year plan’.  Each little quilted square had maybe one feather in it.

Thankfully the Nepalis will have great blankets