My pal, Passport to Adventure’s Julie Conover  – it turns out – wrote a killer blog on traveling and relationships prior to my own,  which she  re-posted I believe as somewhat of a comeback to the drivel I wrote.   She goes after the same point  ( ok … more coherently) but clearly from the female perspective.  Any female perspective on men, as most men know,  is slightly delusional.  It is scientifically accepted that women must be ‘slightly delusional’ about men otherwise the species would never get propagated.

Ok did you read Julie’s essay ?  Then let’s review shall we …  to quote Julie:

You will also see what kind of team the two of you make. Are you both struggling to be the leader?

Umm … no.  The male should never engage in a struggle to be ‘the leader’.  The male traveler is advised to always follow a step and a half behind the female as she will be the one who knows how to get back to the hotel room.

Or do you fall into natural, comfortable roles?

This is important.  One partner should be able to follow a map, as well as know where the map is   … the other should be able to carry both the luggage and the three-foot wooden replica of the Balinese fishing boat that he (of course) just bought as a mantelpiece.  (note:  that partner will not know at this point that the wooden fishing boat will never be allowed out the garage let alone on the mantel)

When one person is having an off day, does the other “step up”, or crumble at having to pick up the slack?

See this is what I mean  … the female sees ‘slack’ as something that must be ‘picked up’.   To the male ‘slack’ is a goal.

Faced with missing our return flight from Milan to the U.S., David sprang into action. While I sat on the curb with our bags

I found this troubling.  This is not characteristic male behavior.  The male traveler does not typically ‘spring into action’  to do anything unless he has ‘dehli belly’ or is trying to make Happy Hour.  You will notice in Julie’s post David is carrying a ‘man purse’ in picture #1 which may explain a few things

and I was impressed by his ability to keep cool under pressure.

Oh  la de da !   Speaking of ‘pressure’  if you look closely at David’s luggage in picture #2,  it is hanging from a right arm clearly four inches longer than the left.  This means his luggage is likely  also 75 pounds,  and if the zippers ‘sprang’ all of a sudden, his clothes would be plastered all over the walls and ceiling of a medium-sized hotel room. 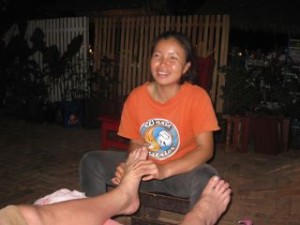 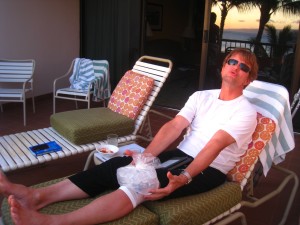 This is the same traveler after actually ‘springing into action”